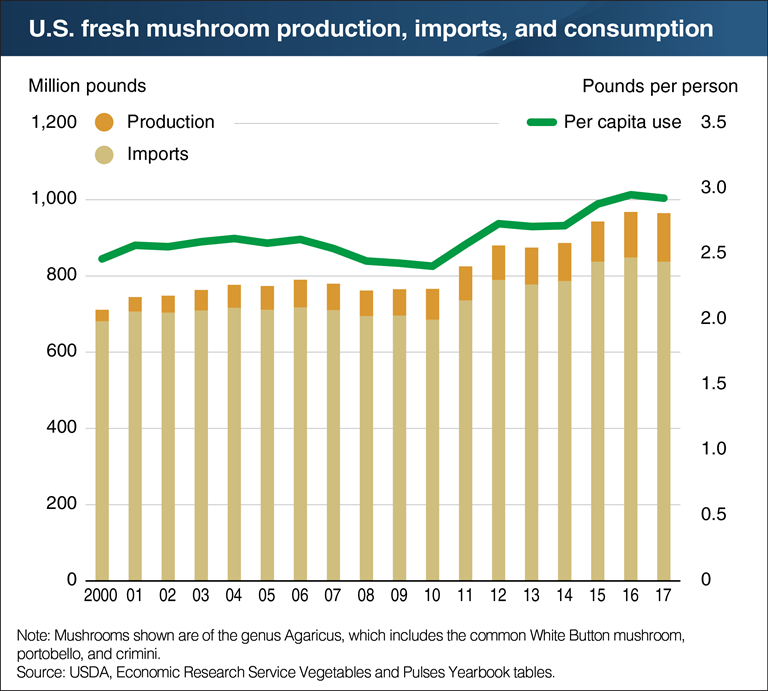 Over 97 percent of the mushrooms produced in the United States fall under the genus known as Agaricus, which includes the common White Button mushrooms, often seen in grocery stores and salad bars, as well as portobello and crimini mushrooms. While some mushrooms are grown for processing uses (canned, dried, and frozen), 88 percent are sold in the fresh market. On average, Americans consume roughly 3 pounds of fresh Agaricus mushrooms each year. Of the amount consumed, 87 percent is produced domestically in States like California and Pennsylvania. A growing share is imported, moving from 4 percent of domestic consumption in 2000 to 13 percent in 2017. Mushroom consumption increased each year since 2013, but fell slightly in 2017, with domestic production falling by just over 1 percent. Even with that decline, however, per capita consumption of Agaricus mushrooms increased by nearly 22 percent since 2010. Additionally, modest increases in wholesale prices since 2016 resulted in increased value to producers despite the reduced output. This chart appears in the ERS Vegetables and Pulses Outlook newsletter, released in October 2017.