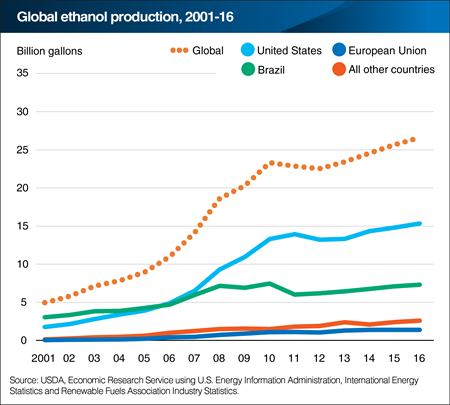 Ethanol production has increased rapidly over the last two decades, making ethanol an important component of today’s transportation fuels. From 2001 to 2016, global ethanol production grew 400 percent, from 5 billion gallons to almost 27 billion gallons. Historically, the United States, Brazil, and the European Union (EU) were the world’s major ethanol markets. In the United States alone, ethanol makes up 10 percent of total gasoline use. Government blending mandates (requirements to add a specified percentage of ethanol to gasoline) have helped fuel increases in ethanol production and consumption worldwide. Despite the global increase in ethanol production, however, many countries do not meet their mandates. Of the ethanol-producing countries outside of the United States, Brazil, and the EU, five countries—Argentina, Canada, China, India, and Thailand—account for 80 percent of the remaining production. This chart appears in the ERS report, "Global Ethanol Mandates: Opportunities for U.S. Exports of Ethanol and DDGS," released in October 2017.