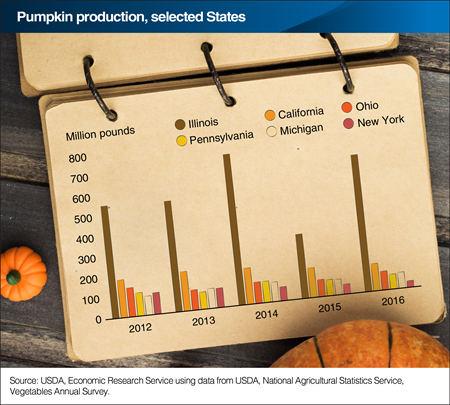 With Halloween soon approaching, many consumers spent the weekend searching for pumpkins at the nearest pumpkin patch. Pumpkin production is widely dispersed throughout the United States. All U.S. States produce some pumpkins, but according to the 2012 U.S. Census of Agriculture, about one-half of pumpkin acres were grown in six States. Illinois is consistently the Nation’s largest pumpkin producer, the majority of which are used for pies and other processed foods. Record rainfall devastated the State’s pumpkin crop in 2015, but Illinois production rebounded in 2016. All other reported States produce primarily decorative (or carving) pumpkins, and all but New York saw around 20 percent decreases in production during 2012-16. New York production stands out, however, having dropped 50 percent over the time period. While 2017 production has not yet been surveyed, media reports indicate a strong Midwest crop but challenges for some growers in New York and Pennsylvania who were hit with cold, wet weather that is less optimal for pumpkin growth. This chart is drawn from data presented in the ERS Pumpkins: Background & Statistics page.