Younger adults generally have higher educational attainment than older ones 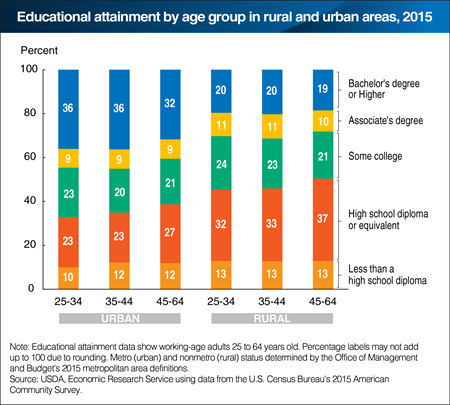 Americans are increasingly educated, but gains in educational attainment vary between urban and rural areas and across demographic groups such as age. In 2015, younger working-age adults generally had higher educational attainment. For example, 36 percent of urban adults ages 25 to 34 had a bachelor’s degree or higher, compared to 32 percent of those ages 45 to 64. Rural adults, on the other hand, had a bachelor’s degree or higher at roughly the same share (19 to 20 percent) across all age groups. Older age groups in both rural and urban areas generally had a higher share of adults with a high school diploma or less (the bottom two bar segments). About half of the rural adults ages 45 to 64 had a high school diploma or less, compared to 39 percent of their urban peers. This chart appears in the April 2017 ERS report Rural Education at a Glance, 2017 Edition.