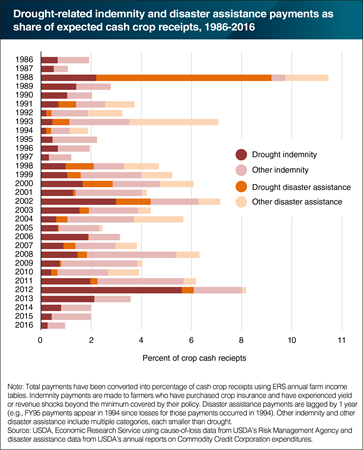 At any given time, some portion of the country faces drought conditions. In recent years, large areas of the United States have experienced prolonged drought, with significant impacts across entire agricultural sectors. A major drought can reduce crop yields, lead farmers to cut back planted or harvested acreage, reduce livestock productivity, and increase costs of production inputs such as animal feed or irrigation water. Since the Dust Bowl in the 1930s, drought has been an important focus of U.S. farm policy. Early Federal policy mitigated farmers’ drought-induced hardships primarily by providing ad hoc disaster assistance in response to a drought. With changes to the Federal crop insurance program in the 1990s, the emphasis of farm programs shifted from ad hoc disaster assistance to risk management, with a greater reliance on crop insurance to compensate farmers for drought losses. As a result, drought has been the largest individual driver of Federal indemnity payments and disaster assistance for over four decades. This chart appears in the June 2017 Amber Waves feature, "Farmers Employ Strategies To Reduce Risk of Drought Damages."