Brazil is a key trade partner for U.S. ethanol markets 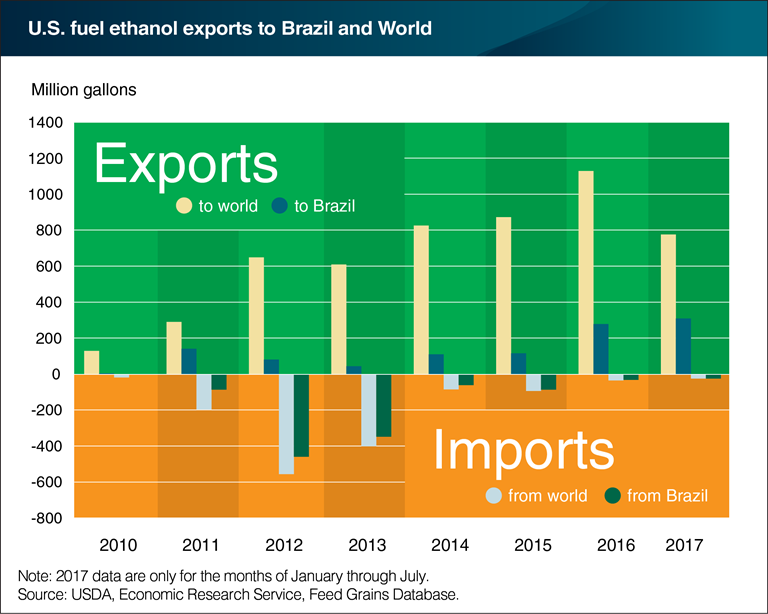 Brazil, the world’s second largest ethanol producer after the United States, plays a large role in U.S. ethanol markets. Not only is Brazil one of the nation’s customers, it is also a competitor and a supplier. Brazilian ethanol is derived from sugar, which is desirable because it is categorized as an advanced biofuel under the renewable fuel standard. Through July of this year, the United States exported 770 million gallons of ethanol, with 40 percent of it going to Brazil. Of the 24 million gallons of ethanol imported into the United States, nearly all originated in Brazil. During this period, the Brazilian government took measures to lower fuel prices, causing sugar mills to switch from producing ethanol to sugar, because of higher returns. The resulting ethanol shortage has been filled by expanding imports from the United States. In response, the Brazilian government announced the imposition of a 20-percent duty on U.S. ethanol imports above the tariff rate quota of 160 million gallons (less than 4 months of shipments at current export levels). This will sharply reduce the competitiveness of U.S. corn-starch ethanol in Brazil and significantly reduce U.S. exports. Brazil is also implementing a new energy policy, called RenovaBio, which will increase ethanol production and consumption as part of greenhouse gas reduction commitments made under the 2015 Paris Climate Conference. This chart is drawn from the ERS Feed Outlook newsletter, released in September 2017.