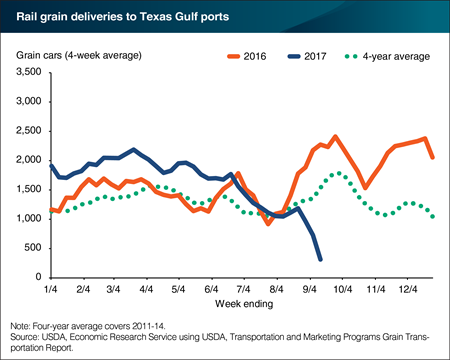 On August 25, Hurricane Harvey made landfall on the Texas coast, bringing record levels of rainfall to the Houston metropolitan area and nearby counties. Rainfall totals in some areas of Texas exceeded 50 inches. Not surprisingly, the resulting widespread flooding reduced rail service along the Gulf Coast and all but halted regional grain exports through the first week of September. Interruptions in grain transportation in the Gulf region have the potential to be particularly impactful on shipments of the U.S. wheat crop. The Federal Grain Inspection Service reports that an average of 46 percent of total U.S. wheat exports ship from Gulf ports in Texas and Louisiana. For the week ending August 31, there were virtually no wheat inspections reported for Gulf ports due to the shutdown of rail and port operations. For the week ending September 7, no wheat was inspected for export at either South Texas or East Gulf ports, while North Texas inspected a relatively modest 50,318 metric tons of hard red winter wheat, down from 160,512 metric tons for the same week in 2016. Wheat export inspections are anticipated to accelerate as rail service that provides access to Gulf loading facilities is restored. Although some railroad repairs may take months, others are expected to be restored more quickly. This chart appears in a special article in the latest Wheat Outlook newsletter released in September 2017.