U.S. agricultural exports forecast up in 2017 and slightly down in 2018 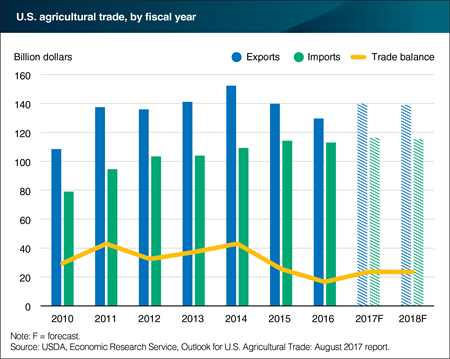 The value of U.S. agricultural exports is forecast at $139.8 billion for fiscal year (FY) 2017, up $10.2 billion from FY 2016, and following 2 consecutive years of declining export values. The increase reflects improvement in the global economy, a lower value for the U.S. dollar, and stronger markets for several individual commodities including grains, feed, and soybeans. The initial FY 2018 forecast shows that exports reach $139 billion, still above FY 2016 levels but slightly below current FY 2017 estimates. The value of FY 2017 agricultural imports is forecast at $116.2 billion, up $3.2 billion from last year and the highest level on record. However, the initial FY 2018 forecast reveals a $700 million decline for agricultural imports. The strong export increase and modest import increase for FY 2017 indicates that the agricultural trade surplus will rise to $23.6 billion, up $7 billion from FY 2016. Agricultural trade surplus is expected to remain virtually unchanged in FY 2018 due to the nearly identical declines in the value of exports and imports currently expected. This chart is from ERS’s Outlook for U.S. Agricultural Trade: August 2017.