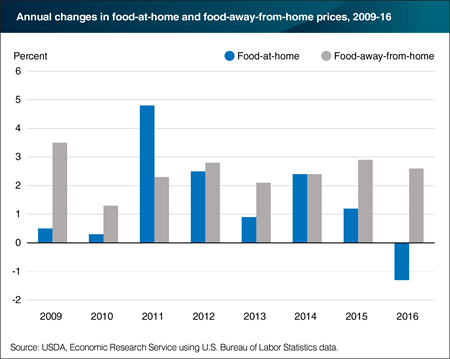 Grocery store food (food-at-home) prices tend to be more volatile than restaurant (food-away-from-home) prices, and this was true during 2009-16. Over this period, restaurant prices rose between 1.3 and 3.5 percent per year, while food price changes at the grocery store were more irregular, ranging from a 4.8-percent increase in 2011 to a decrease of 1.3 percent in 2016. In 2016, grocery store prices and restaurant prices moved in opposite directions. Food-away-from-home prices rose 2.6 percent on average, while food-at-home prices declined 1.3 percent. Although it may seem that prices for food—whether purchased at a grocery store or restaurant—should move in the same direction, differences in production processes and operating costs between the two food sectors can, in part, explain the divergence in 2016. Lower farm commodity prices and energy costs contributed to the decline in at-home food prices in 2016, but eating out places had to absorb rising wages and benefits for employees who prepare, serve, and clean up in foodservice establishments. This chart appears in "Since 2009, Restaurant Prices Have Generally Risen Faster Than Grocery Store Prices" in ERS’s Amber Waves magazine, August 2017.