Americans’ consumption of vegetables and legumes has moved closer to recommendations 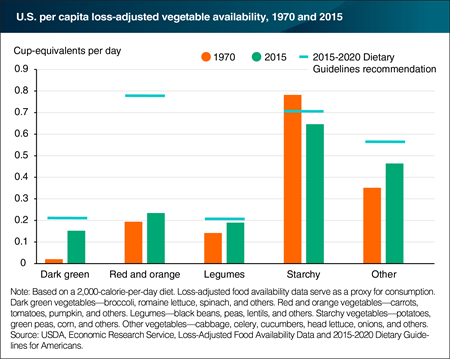 The 2015-2020 Dietary Guidelines for Americans recommend that people on a 2,000 calorie-per-day diet consume 2½ cup-equivalents (cup-eq) of vegetables per day. A cup-eq of vegetables is generally equal to 1 cup of raw or cooked vegetables or vegetable juice, or 2 cups of raw leafy greens. The Guidelines include recommended amounts of five vegetable subgroups (dark green, red and orange, legumes, starchy, and other) and advise Americans to consume a variety of vegetables from each subgroup. According to ERS’s loss-adjusted food availability data (a proxy for consumption), the average American consumed 1.72 cup-eq of vegetables and legumes per day in 2015—69 percent of the daily recommendation for a 2,000 calorie-per-day-diet—and up from 1.49 cup eq in 1970. While starchy vegetable consumption declined by 17 percent (mostly due to drops in fresh potatoes and canned corn), daily dark green vegetable consumption grew from 0.02 cup-eq in 1970 to 0.15 cup-eq in 2015. Romaine and leaf lettuce and fresh broccoli were the largest contributors, reflecting the growing demand for salads and fresh vegetables. Consumption of legumes and other vegetables increased, closing in on the Guidelines’ recommendations. Red and orange vegetable consumption grew to 0.23 cup-eq per day in 2015, but is still just 30 percent of the recommendation. The data for this chart are from ERS’s Food Availability (Per Capita) Data System, updated July 26, 2017.