France, Germany, and the United Kingdom lead the EU in wheat production, but new member states are leading in growth 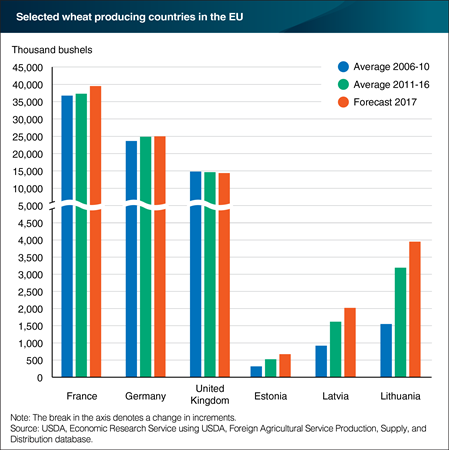 The European Union (EU) is the largest wheat producer in the world. Within the EU, France, Germany, and the United Kingdom are the largest wheat producers. Wheat production in the most important wheat producing nations has been relatively steady since 2006, and these countries have not experienced a very large increase in average output or percentage of EU output. A number of smaller wheat-producing countries, however, have increased wheat output substantially over the last 10 years. These nations include many of the EU’s Eastern European new member states: Poland, Romania, the Czech Republic, Bulgaria, Hungary, and Slovakia. The increases have been particularly pronounced in the Baltic States of Lithuania, Latvia, and Estonia, which increased wheat output by more than 100 percent, since 2006. These countries moved from a 1.3 percent share of EU-28 wheat output in 2006 to a 4.3 percent share in 2016. These increases in the Baltic States are generally due to both increases in area planted to wheat and gains in yield per acre. This chart appears in the ERS Wheat Outlook newsletter released in August 2017.