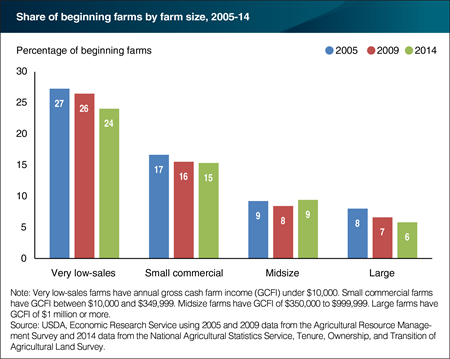 The aging of the overall farm population raises questions about whether there are enough beginning farms to replace those that exit farming. Between 2005 and 2014, the share of beginning farms generally declined across all farm sizes, though overall farm numbers were relatively steady during this period. A beginning farm is one where all operators have 10 years or less farming experience. Very-low sales farms—those with annual gross cash farm income (GCFI) under $10,000—had the most beginning farms across these years, but also saw the greatest decline: from 27 percent in 2005 to 24 percent in 2014. By comparison, the share of beginning midsize farms—those with GCFI between $350,000 and $999,999—hovered around 9 percent during this period. In 2014, that represented about 12,000 midsize farms. This chart and the factors affecting these results appear in the ERS report The Changing Organization and Well-Being of Midsize U.S. Farms, 1992-2014, released October 2016.