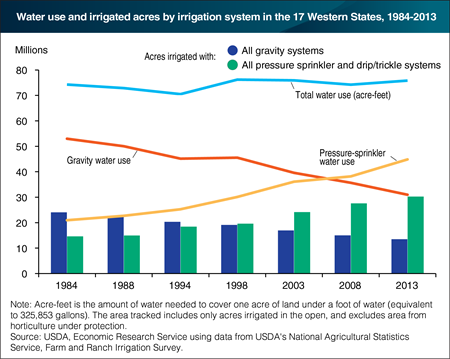 There are two main types of irrigation systems: gravity and pressurized irrigation. Gravity irrigation uses the force of gravity and field borders or furrows to distribute water across a field. Pressurized irrigation, on the other hand, delivers water to the field under pressure in lateral, hand-move, and center-pivot pipe systems with attached sprinklers. In the 17 most Western States—where water use for agriculture was greatest—total irrigated acres and total water use remained relatively stable between 1984 and 2013, the latest data available. However, the share of water applied using gravity systems steadily declined from 71 percent in 1984 to 41 percent in 2013. Meanwhile, the share using pressure-sprinkler systems steadily increased from 28 percent in 1984 to 59 percent in 2013. Irrigated acres followed similar trends, with acreage using gravity systems declining over time and pressure-sprinkler systems increasing. During that period of time, irrigators shifted to using more pressure-sprinkler systems to improve their irrigation efficiency and to reduce irrigation costs. This chart appears in the June 2017 Amber Waves data feature, "Understanding Irrigated Agriculture."