Wholesale turkey prices in 2017 remain below years past 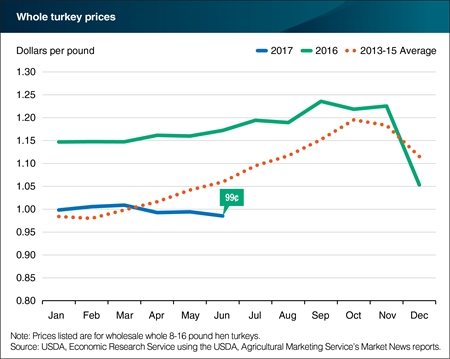 Whole turkey prices in 2017 fell relative to 2016 and have remained strikingly flat since January. Typically, wholesale turkey prices have a seasonal trend, with prices climbing from their bottom level in the beginning of the year to a peak near Thanksgiving. The average price for a whole frozen hen in June was actually slightly below January’s price. Between 2013 and 2015, June whole turkey prices averaged 8 percent higher than in January. Prices for breast meat are also below 2016 levels, indicating that demand may not be keeping up with current supply levels. Sustained low prices are often a signal to producers to slow the pace of growth, but production in 2017 has remained above 2016 levels through the first half of the year. It is unclear whether the declines in the wholesale market will translate to reduced retail prices leading up to Thanksgiving. This chart appears in the ERS Livestock, Dairy, and Poultry Outlook newsletter released in July 2017.