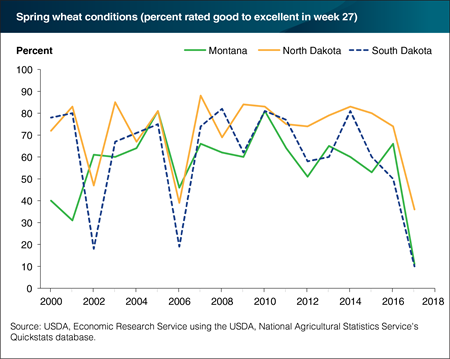 Hard Red Spring (HRS) wheat (the largest class of spring wheat) is predominately grown in the Northern Plains of the United States. This key production region, which includes Montana, North Dakota, and South Dakota, has been greatly affected by a lengthy dry spell that has plunged the area into varying levels of drought, ranging from abnormal dryness to exceptional drought. On July 9, widespread drought conditions were noted for both North and South Dakota as well as Eastern Montana, and the proportion of the HRS crop rated “good” to “excellent” was just 36 percent, 10 percent, and 11 percent, respectively. Challenging weather conditions have reduced projected yields, now forecast at 39 bushels per acre, and contribute to a 22 percent year-to-year decline in HRS production for the 2017/18 marketing year. Expectations for a small harvest have helped to rally spring wheat prices in recent weeks and supports this month’s 50 cent increase in the 2017/18 all wheat price. This chart appears in the ERS Wheat Outlook newsletter, released in July 2017.