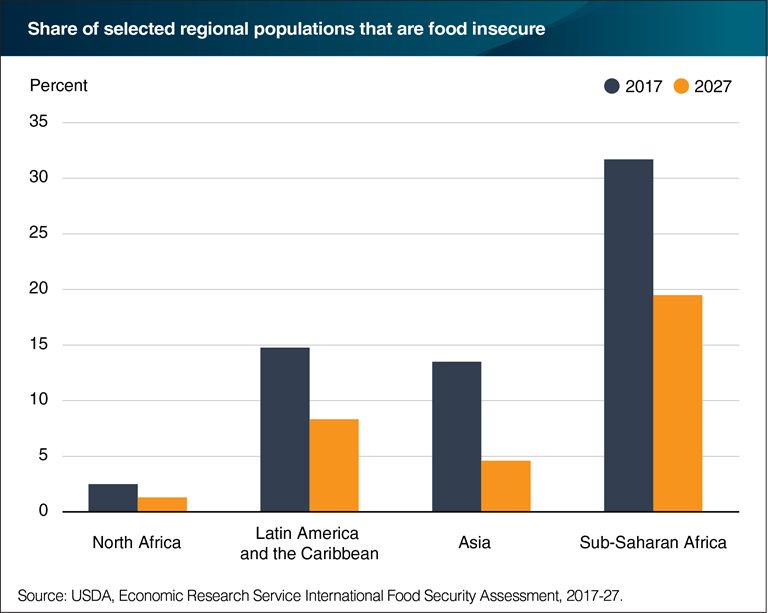 Given projections for low food prices and rising incomes, food security is expected to improve through 2027 for 76 low- and middle-income countries covered by ERS’s International Food Security Assessment, 2017-27. The share of the population in the 76 countries that is food insecure, defined as not having access to at least 2,100 calories per day, is projected to fall from 17.7 percent in 2017 to 8.9 percent in 2027, with the number of food-insecure people declining from just below 650 million to about 370 million. Food security indicators differ greatly by region. Sub-Saharan Africa has the highest share of food-insecure people, with 31.7 percent of the population food insecure in 2017. That share is projected to drop to around 20 percent of the region by 2027 as incomes rise. Asia is projected to significantly reduce its share of food insecure people by 2027 to less than 5 percent, a near three-fold decrease from the current 13.5 percent. Latin America and the Caribbean are expected to improve as well, but to a lesser degree. The most food secure region included in the study remains North Africa, which is expected to have only 1.3 percent of its population experiencing food insecurity by 2027. This chart appears in the ERS International Food Security Assessment, 2017-27 report, released on June 30, 2017.