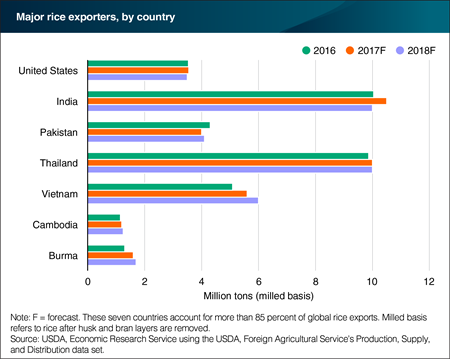 Global rice trade is projected to increase 1 percent to 42.3 million tons in 2018, the third highest on record and the second consecutive year of expanded trade. A major factor behind the expanded trade in 2018 is increased exports from three of the top six exporters—Vietnam, Pakistan, and Burma. Vietnam’s 2018 exports are expected to increase 400,000 tons to 6.0 million tons due to increased demand from Southeast Asia, especially from the Philippines. China is again forecasted to be the largest export market for Vietnam’s rice. Pakistan is projected to export 4.1 million tons of rice in 2018, up 0.1 million from a year earlier, a result of a slightly larger crop. Burma is expected to export 1.7 million tons of rice in 2018, up 100,000 tons from 2017, primarily due to stronger demand from regional buyers and the European Union. In contrast, India’s exports are projected to drop 500,000 tons in 2018 due to a smaller crop and stronger domestic use. Thailand’s exports are expected to be flat in 2018, while U.S. rice exports are projected to decline 50,000 tons as a result of higher prices and tighter supplies. This chart appears in the ERS Rice Chart Gallery updated in June 2017.