Fresh sweet cherries expected to be plentiful this summer 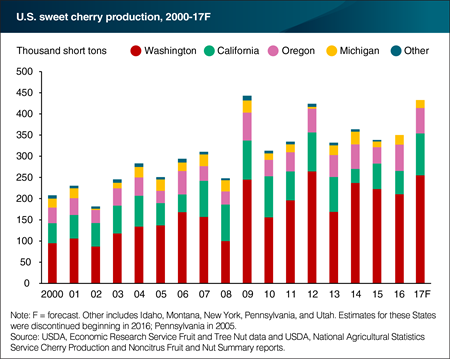 In June, USDA forecasted that the 2017 U.S. sweet cherry crop will reach 432,760 tons, up 24 percent from last year and the second largest on record, if realized. Production increases are forecasted in the top two producing States—Washington and California—ranging from 21 to 80 percent. While forecasted down slightly, sweet cherry crop production in Oregon, also a major grower, will be among the largest the State has generated. Sweet cherries make up the vast majority of U.S. fresh-market cherries, while tart or “sour” cherries are mainly processed and used in cakes, pies, and tarts or dried for additional uses. Yields in California benefitted from winter rains, following multiple seasons with drought conditions. An early May freeze, however, dampened crop expectations in Michigan. Significantly higher shipment volumes than last season have been reported in California, driving down cherry prices since late spring. The harvest has now moved to the Northwest, with ample summer supplies expected to meet the generally growing market domestically and abroad, barring any weather problems. Crop marketability and quality could change drastically upon maturity because cherries are highly susceptible to cracking from rains near or at the harvest-ready stage. This chart provides an update to data found in the ERS Fruit and Tree Nut Outlook newsletter released in June 2016.