Farm-level prices for agricultural commodities rose for much of the 2000s, but declined in recent years 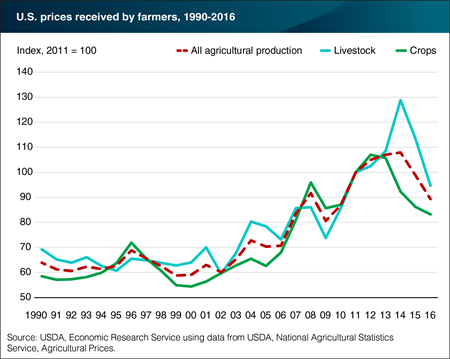 Although prices for agricultural commodities frequently vary from year to year, they have generally moved higher in the past decade. In these aggregate measures, by 2014, price indices for crops were up more than 35 percent above their 2006 levels, while those for livestock rose over 75 percent from 2006 to 2014. Prices for both crops and livestock have fallen since 2015 (crop prices began falling earlier in 2013), as U.S. and global markets responded to higher prices by increasing production. While the aggregate prices received for all agricultural production fell 17 percent, livestock and its related products fell by 26 percent since 2014. The fall in prices for livestock coincides with declining input costs for feed commodities like corn and soybean. Additionally, this reflects the beginning of the recovery in the cattle and beef industry that had seen production declines since 2010. Crop prices also declined, but to a lesser extent at 10 percent since 2014. This chart appears in the ERS publication, "Selected charts from Ag and Food Statistics: Charting the Essentials, 2017," released April 28, 2017.