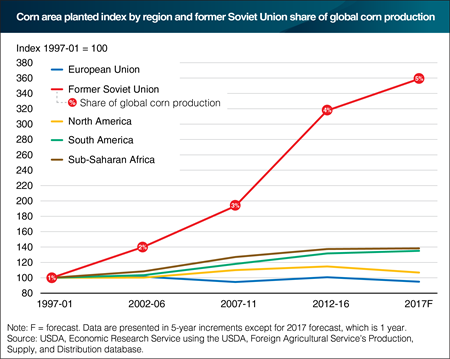 Corn planted area changes are uneven among the regions in the world, and the fastest to expand its corn area is by far the Former Soviet Union (FSU) region. The majority of the growth comes from Ukraine and Russia, countries that produced little corn in the past. Importantly, these countries have also become significant, albeit smaller, corn exporters, with combined exports increasing twelvefold over the last decade. Policy changes in the early 90s required farms to be self-financing and gave farmers decision-making freedom that allowed them to switch to more profitable crops like corn, sunflower seed, and soybeans, at the expense of rye, barley, oats, and pastures. Ukraine and Russia became more integrated into the world agricultural economy, such that trade, foreign agricultural investment, and technology transfer all expanded. All these developments have helped to drive the expansion of corn area and yields. As corn area and yields have grown, the FSU region has increased its share of global corn production from 1 percent in 1997-01 up to 5 percent in the 2017 forecast. Though their corn output is still small compared to the largest world producers (North America is expected to produce 38 percent of global corn in 2017), Ukraine has become a major corn exporter, behind the United States, Brazil, and Argentina. This chart appears in the ERS Feed Outlook Newsletter, released in May 2017.