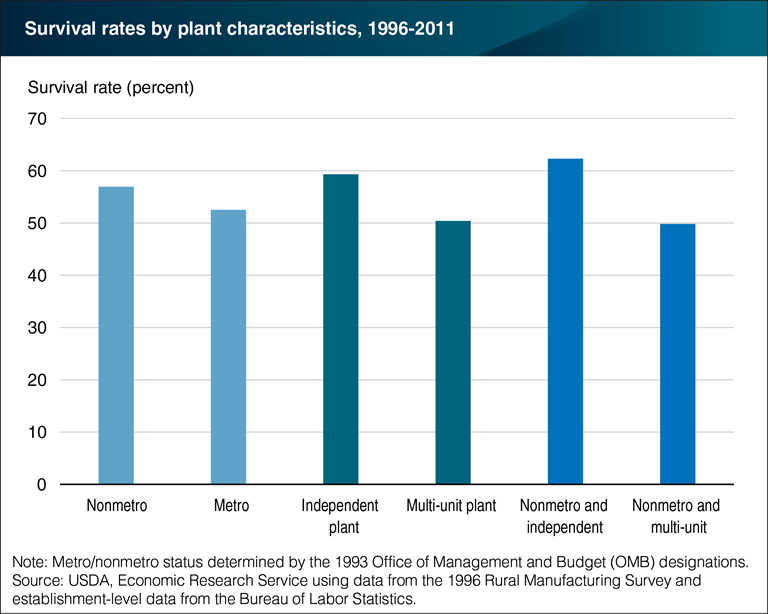 Between the 2001 and 2007-09 recessions, U.S. manufacturing employment fell by close to 30 percent. In many communities, the closing of a manufacturing plant can reduce local employment, earnings, and government tax revenue. To improve understanding of the factors affecting the survival of manufacturing plants, ERS studied plant survival over a 15-year period (1996 to 2011). Over this period, the average survival rate—the share of plants that were still employers—in rural (nonmetro) counties was 57 percent. By comparison, plants in urban (metro) counties had an average survival rate of 53 percent during this period. Survival rates also varied by ownership structure: Overall, independent plants (single-unit plants with only one physical location) had a 59-percent survival rate, while multi-unit plants had a 50-percent survival rate. Independent plants located in rural counties had the highest average survival rate (62 percent). Although States and regions have long tended to put more effort into recruiting and retaining multi-unit plants, the research shows that independent plants are more likely to survive—in both rural and urban counties. This chart appears in the ERS report Rural Manufacturing Resilience: Factors Associated With Plant Survival, 1996-2011, released May 2017.