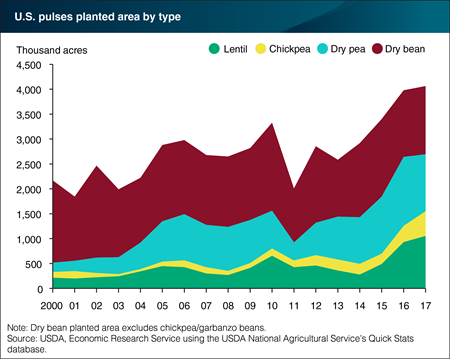 Led by expectations of surging seedings for lentils and chickpeas in 2017, aggregate U.S. area planted to pulse (the dry edible seed of a legume plant) crops is projected to reach a new record high of more than 4.06 million acres. Chickpea planted area is forecast to rise to nearly 500,000 acres, an increase of more than 53 percent compared to the prior year. This production growth is due to its sustained price strength and favorable returns relative to other crops such as wheat and corn. Lentil planted area is expected to expand by 13 percent to 1.055 million acres. In 10 years’ time, lentil planted area has more than tripled, boosted by expanding sales to India and growing domestic consumption, both of which have supported prices and encouraged plantings. Dry bean area planted, exclusive of garbanzo bean (also known as chickpeas) is projected to have a modest increase, up about 2 percent to 1.368 million acres and just slightly below the 10-year average area planted of 1.415 million acres. Dry peas are the only pulse crop projected to have fewer acres seeded in 2017. This chart appears in the ERS Vegetables and Pulses Outlook report, released on April 28, 2017.