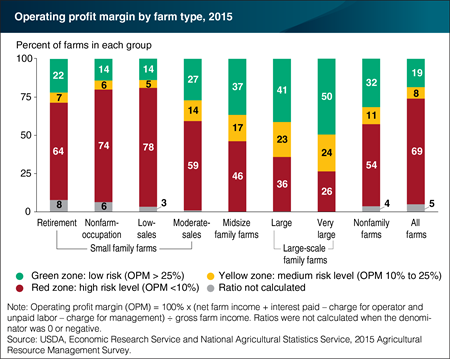 Ongoing innovations in agriculture have enabled a single farmer, or farm family, to manage more acres or more animals. Farmers who take advantage of these innovations to expand their operations can reduce costs and raise profits because they can spread their investments over more acres. In 2015, larger family farms displayed stronger financial performance, on average, than smaller farms. For example, 74 percent of very large family farms—those with gross farm cash income (GCFI) of $5 million or more—had estimated operating profit margins (OPM) of at least 10 percent. This represents the safer yellow and green zones, with lower financial risk. By comparison, 54 percent of midsize family farms (GCFI of $350,000 to $999,999) also had an OPM of at least 10 percent. Most small farms (GCFI under $350,000) in the red zone (OPM under 10 percent), had a negative OPM, the result of losses from farming. Small farms account for 90 percent of U.S. farms, but only contribute about a quarter of the value of production. The majority of their operator households’ income comes from off-farm sources. This chart appears in the March 2017 Amber Waves data feature, "Large Family Farms Continue To Dominate U.S. Agricultural Production."