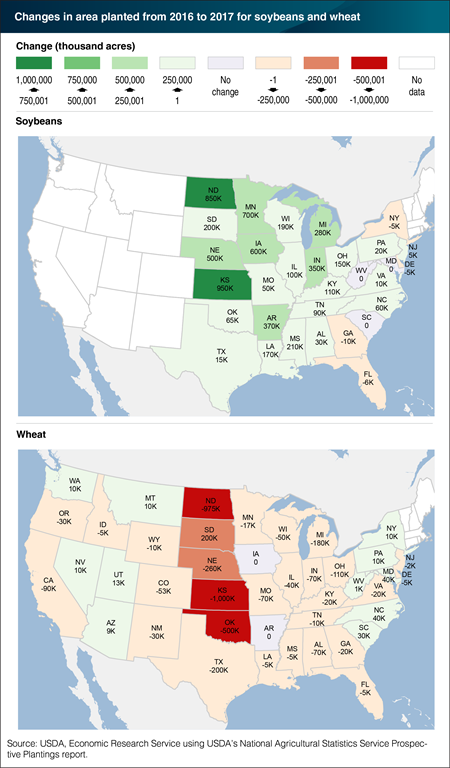 The latest projections for crop area plantings in 2017 indicate contrasting records for soybeans and wheat. Soybean plantings for 2017 are projected to reach 89.5 million acres, a new record-high. In contrast, forecast wheat plantings of 46.1 million acres would be a record low, if realized. Taken together, these planted area projections indicate that many farmers are switching from wheat to soybean production in several key wheat-growing States, including Kansas, Michigan, Nebraska, North Dakota, Oklahoma, South Dakota, and Texas. Since 2011, soybean acreage in these seven States has expanded by one-third, while wheat area has contracted. Farmers are likely responding to the higher prices and potential returns associated with soybeans, after multiple years of wheat prices trending lower. For the 2016/17 marketing year, the projected midpoint season-average farm-gate price for soybeans was $9.55 per bushel, slightly higher than the 2015/16 average of $8.95 per bushel. The all-wheat price for the 2016/17 marketing year is projected at $3.85 per bushel, more than a dollar below the 2015/16 season-average price and the lowest since 2005/06. This chart appears in the ERS Wheat Outlook report released in April 2017.