Domestic use of canola, corn, and palm oil growing at a faster rate than soybean oil 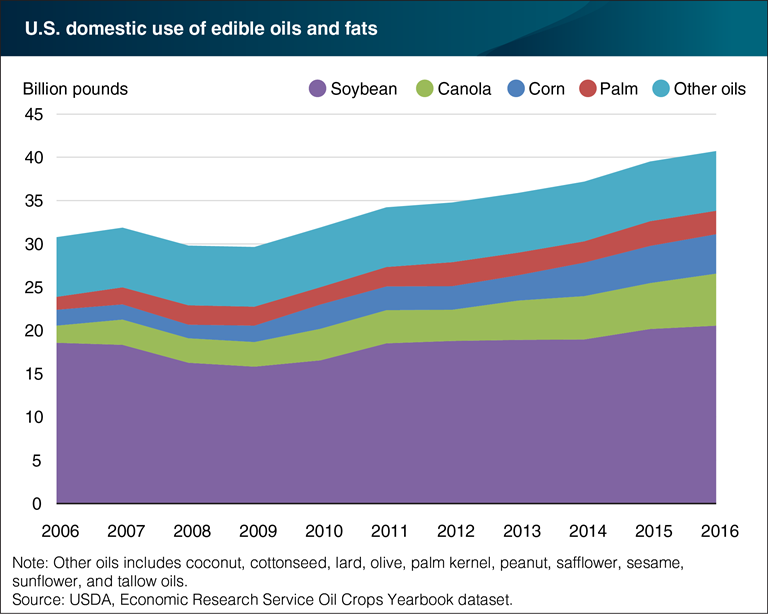 In 2016, soybean oil dominated the domestic use of edible oils and fats. Just over 50 percent of oil usage that year was sourced from soybeans. Interestingly, this is the lowest share of domestic use for soybean oil since at least 2003. Additional edible oils have grown in usage over this period. Canola, corn, and palm oils have each grown at a faster rate than soybean oil. Since 2011, canola, corn, and palm oil usage has grown 66, 57, and 21 percent, respectively. Over the same period, soybean oil use increased by 11 percent. The growth in canola oil consumption can be partially attributed to the thriving Canadian industry, which is the third largest producer in the world. The United States imported 1.9 million metric tons of canola oil from Canada in 2016, nearly half of the country’s total production. The growth of corn oil has been the result of expanded oil extraction from corn distillers grains and is likely primarily used for biodiesel fuel production. Global palm oil production has nearly doubled over the last 10 years and has resulted in a much larger export market, which has contributed to growing U.S. imports. Low prices at the wholesale level may help explain the appeal of canola and palm oil relative to other oils, but soybean oil remains the most price competitive. This chart is drawn from data in the annual ERS Oil Crops Yearbook tables updated in March 2017.