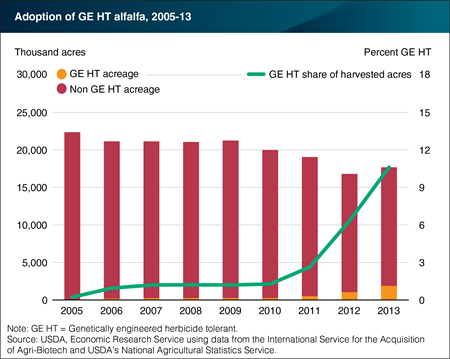 Alfalfa is the fourth largest U.S. crop in terms of acreage and production value, behind only corn, soybeans, and wheat. Most of the alfalfa grown in the United States is used as feed, particularly for dairy cattle. However, weed infestations can reduce alfalfa yields, lower forage quality, and increase the severity of insect infestations. Planting genetically engineered (GE), herbicide tolerant (HT) alfalfa reduces crop damage from specific herbicides. Alfalfa tends to be seeded (on average) once every 7 years, so GE HT alfalfa adoption rates have increased relatively slowly compared to other GE HT crops, such as corn, cotton, and soybeans. In 2013, about 810,000 acres were planted with GE HT alfalfa, approximately a third of newly seeded acres that year. This chart appears in the ERS report The Adoption of Genetically Engineered Alfalfa, Canola, and Sugarbeets in the United States, released November 2016.