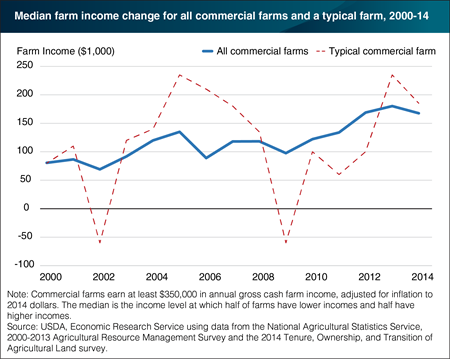 Commercial farm income is highly variable from year to year, fluctuating with output and prices. Income variability can affect key farm decisions, including how much to invest in farm assets (such as land or machinery) and how much to save as a cushion for low-earning years. Aggregate statistics, like the median income for all farms, can provide useful insight into how the farm sector as a whole fares from year to year—but can mask considerable variation for individual farms. For example, farms in one region might be thriving, whereas in another region they might be experiencing low incomes due to a localized drought. Between 2000 and 2014, median farm income for commercial farms ranged from about $70,000 to $180,000, with income fluctuating between consecutive years an average of $20,000. By comparison, a typical (representative) commercial farm with the same average income as the median commercial farm (about $120,000) could see its income fluctuate much more—with an average income swing of $86,000. This chart appears in the ERS report “Farm Household Income Volatility: An Analysis Using Panel Data From a National Survey,” released February 2017.