Payments for energy production, and the share of farms receiving them, vary by State 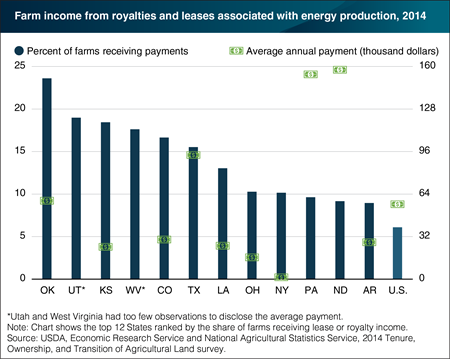 Landowners can lease farmland for energy production, such as for oil exploration or wind turbines. For example, households that own the oil and gas rights for their property or for land in other States may lease these rights to an energy company. In 2014, the majority of income from royalties or leases associated with energy production was earned from selling or leasing these rights. In Oklahoma, Utah, and Kansas, about 20 percent of farms received income from energy production. In States with active development of shale oil or gas, about 12 percent of farms received an average income of $65,781 from energy production—compared with 6 percent and $56,162 for the entire United States. Average payments were highest in North Dakota ($157,000) and Pennsylvania ($154,000), mainly due to oil and gas drilling in the Bakken and Marcellus shales. Total payments from energy companies to farms reached $2.9 billion in 2014, up from $2.3 billion in 2011. This chart appears in the November 2016 Amber Waves article, "Share of Farm Businesses Receiving Lease and Royalty Income From Energy Production Varies Across Regions."