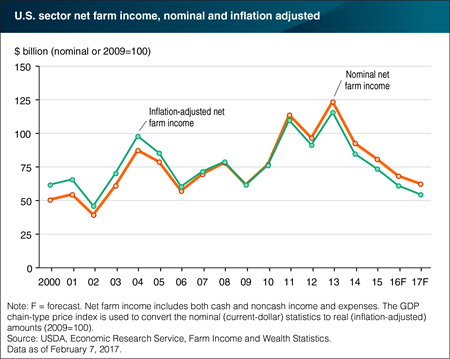 Net farm income is a conventional measure of farm sector profitability that is used as part of the U.S. Gross Domestic Product calculation. Following several years of record highs, net farm income trended downward from 2013 to 2016. For 2017, ERS forecasts net farm income will fall to $62.3 billion ($54.8 billion in inflation-adjusted terms). If realized, this would be an 8.7 percent decline from the prior year and a decline of 49.6 percent from the record high in 2013. The expected decline in 2017 net farm income is driven by a forecast reduction in the value of production. Crop value of production is forecast down $9.2 billion (4.9 percent), while the value of production of animal/animal products is forecast to decline by less than $1 billion (0.5 percent). Find additional information and analysis in ERS’ Farm Sector Income and Finances topic page, released February 7, 2017.