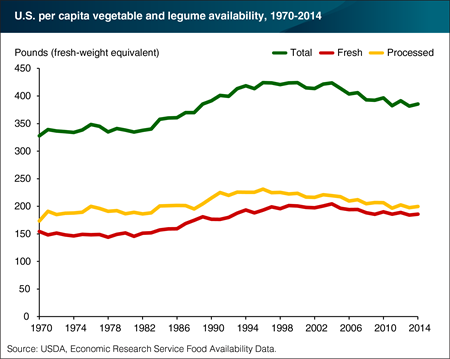 Vegetables and legumes are widely recognized as a good source of many vitamins, minerals, and dietary fiber. According to ERS’s food availability data, the supply of vegetables and legumes available to eat on a per person basis grew from 328 pounds in 1970 to 424 pounds in 2004. Between 2004 and 2014, per person vegetable and legume (pulses and beans) availability fell by 39 pounds to 385 pounds. Fresh and processed potatoes—frozen, canned, dehydrated, and chips—accounted for 59 percent of the 2004-14 decline. Over the longer period of 1970 to 2014, fresh vegetable availability rose by 20 percent; fresh bell peppers, tomatoes, onions, broccoli, and cucumbers combined grew by 36 pounds during that time. Per person availability of canned, frozen, and other processed vegetables and legumes increased from 174 pounds in 1970 to 225 pounds in 1998, then began a decline to 200 pounds in 2014. A version of this chart appears in the ERS report, U.S. Trends in Food Availability and a Dietary Assessment of Loss-Adjusted Food Availability, 1970-2014, released on January 27, 2017.