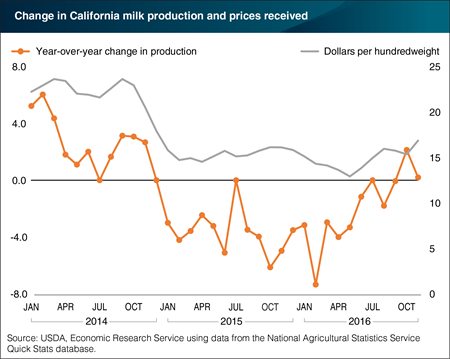 California leads the Nation in dairy production, manufacturing roughly 20 percent of the Nation’s milk. The State is also the leading producer of butter and nonfat dry milk and is second to Wisconsin in cheese production. The ongoing drought in California has had an impact on the State’s dairy output, contributing to negative year-over-year growth since the end of 2014 until October 2016. In addition to drought conditions, prices received by California dairy farmers were down 30 percent in 2015 and dipped even further in 2016, before recovering in June 2016. The upward trend in prices received in late 2016 may help explain the movement back toward positive growth in California’s dairy production. This chart is drawn from data discussed in the ERS Livestock, Dairy, and Poultry Outlook report released in December 2016.