Non-operators were more likely than operators to inherit farmland 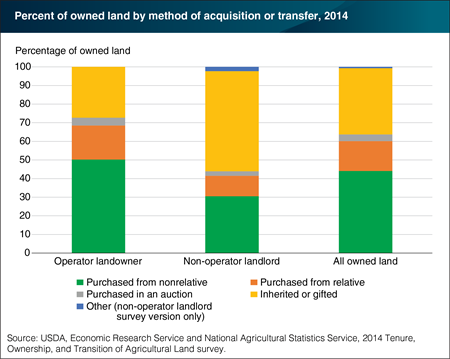 Land may be acquired in a number of ways, including sales, gifts, and inheritances. Arms-length purchases from nonrelatives are a traditional method for acquiring land, particularly for those without family or personal connections to agricultural landowners. In 2014, operating landowners—those who own farmland and operate some or all of it—purchased half of their land from nonrelatives. This group acquired another 27 percent of land through inheritances or gifts. In contrast, non-operator landlords—those who own and rent farmland but are not actively involved in its operation—acquired 30 percent of their land in purchases from nonrelatives. The majority of non-operator land (54 percent) was inherited or received as a gift. Since most farming operations are family farms, it is not surprising that a larger share of operator landowners’ land (18 percent) was purchased from a relative compared to non-operators (11 percent), as this suggests that land is being sold from one family generation to the next. This chart appears in the August 2016 Amber Waves feature, “Land Acquisition and Transfer in U.S. Agriculture.”