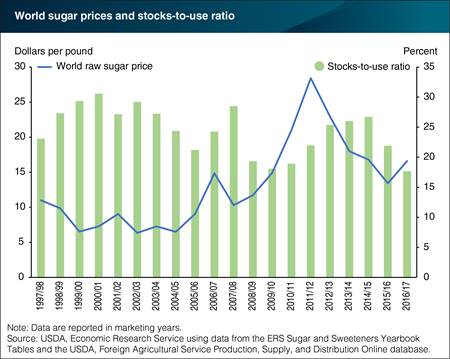 World raw sugar prices increased in the 2015/16 marketing year after a four-year decline from 2010/11. Projections for 2016/17 support higher prices continuing through 2017. Projected human sugar consumption is expected to be greater than production for the second consecutive year, after a prolonged period of surplus production during the years of declining prices. Due to the global production deficit, global inventories are projected to be drawn down again in 2016/17, resulting in the lowest stocks-to-use ratio in more than 20 years. Through the first two months of 2016/17, raw sugar prices have been 50 percent higher than the previous year, due in large part to the relatively tight supply and use market outlook. This chart draws from the Sugar and Sweeteners Outlook report published in December 2016.