Seventy percent of U.S. calories consumed in 2010 were from plant-based foods 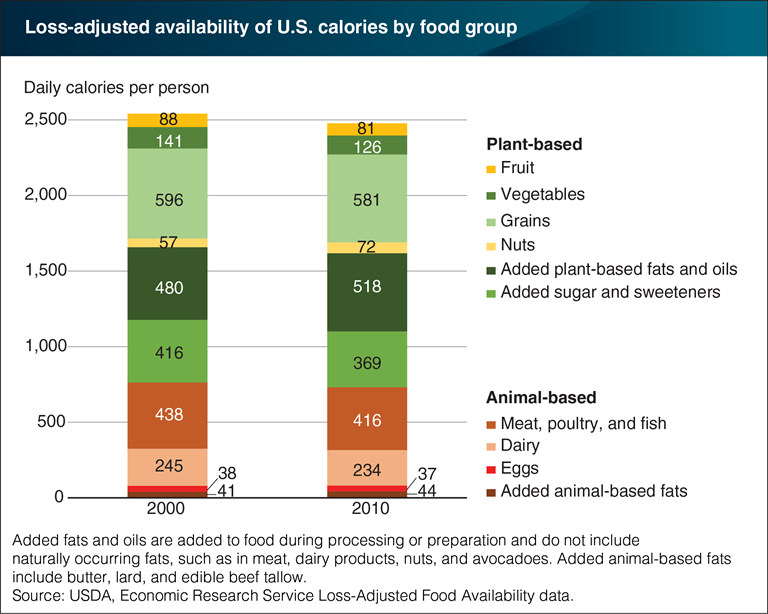 ERS’s loss-adjusted food availability data provide estimates of the sources of calories in the U.S. diet. These data are derived from the supply of food available for consumption and adjusted for inedible peels and pits and for spoilage, plate waste, and other losses to more closely approximate actual intake. Loss-adjusted daily calories per person decreased by 2 percent between 2000 and 2010 from 2,545 to 2,481 calories. The share of calories from animal- and plant-based foods was the same in both years at 30 percent and 70 percent, respectively. In both years, grains were the primary contributor to daily calories per capita. Added plant-based fats and oils—such as salad and cooking oils, margarine, and shortening—ranked second, followed by meat, poultry, and fish. Per capita availability of calories from nuts showed the largest percentage change, posting a 25-percent increase to 72 calories per day in 2010. Calories from the vegetable and added sugar and sweeteners categories decreased by 11 percent. This chart appears in “A Look at Calorie Sources in the American Diet” in the December 2016 issue of ERS’s Amber Waves magazine.