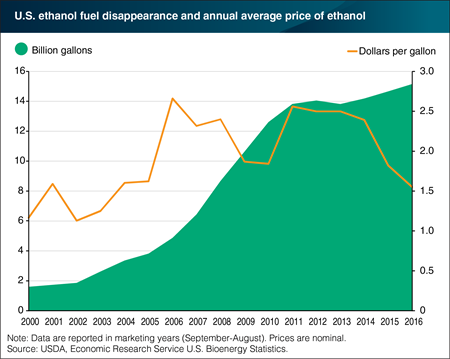 In the United States, production of ethanol is largely tied to federally mandated renewable fuel standards contained in the Energy Independence and Security Act of 2007 and the prior Energy Policy Act of 2005. The former calls for 36 billion gallons of renewable fuels in production by 2022, but requires that an increasing share – 21 billion gallons – of the mandate be met with advanced biofuels, which are biofuels produced from feedstocks other than corn starch (and with 50 percent lower-lifecycle greenhouse gas emissions than petroleum fuels). Corn based ethanol production has begun leveling off since 2010 as production nears the cap for non-advanced biofuels. As production has leveled off, the average annual price of ethanol has declined. The average ethanol price in 2016 was $1.55 per gallon, the lowest price since 2003. While the price of ethanol is also impacted by unrelated movements in the corn market, slowing growth of ethanol production has impacted the prices of both commodities. The data in this chart is drawn from the ERS U.S. Bioenergy Statistics data product updated in December 2016.