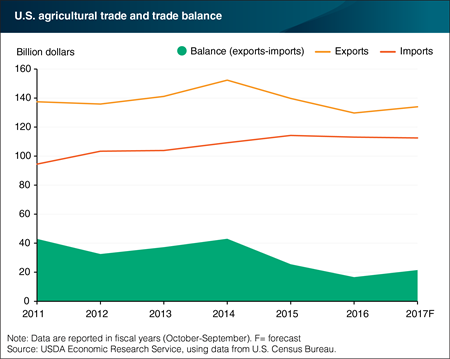 USDA forecasts U.S. agricultural exports in fiscal year 2017 to reach $134 billion, up 1 percent from the previous forecast in August—largely due to expected increases in dairy and livestock byproduct exports. U.S. agricultural imports in fiscal year 2017 are projected at $113 billion, down 1 percent from the August forecast. Reduced imports of horticultural, sugar, and tropical products are leading this decline. As a result, the U.S. agricultural trade surplus is expected to increase to $22 billion in fiscal 2017. The forecasted surplus is an increase compared with the expected $17 billion surplus in fiscal 2016, but nearly half of the 2011 surplus of $43 billion. The U.S. agricultural sector consistently runs a trade surplus, benefiting the overall U.S. trade balance—which has run a deficit every year since 1976. The data in this chart is drawn from ERS’s quarterly Outlook for U.S. Agricultural Trade report released on November 30th, 2016.