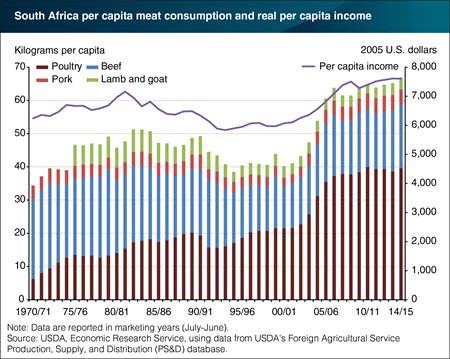 Like many middle-income countries, South Africa’s rising income has been accompanied by significant increases in per capita meat consumption. Poultry meat, being cheaper than other meats, accounts for most of the growth. Per capita poultry consumption more than doubled from 17 kilograms in 1994/95 to 40 in in the 2013/14 marketing year. In recent years, beef consumption has also risen, but poultry consumption remains dominant. Consumption of other meats has remained constant. South Africa’s real per capita income has maintained almost uninterrupted growth since 2000, only dropping in 2009 with the global recession. The initial surge in poultry consumption in the early 2000’s closely tracks the rapid rise in per capita income. While domestic production of poultry has expanded rapidly to accommodate demand, imports have grown at an even faster rate. This chart appears in the ERS Poultry Production and Trade in the Republic of South Africa: a Look at Alternative Trade Policy Scenarios special outlook report released in November 2016.