California has the highest value among U.S. States for agricultural exports 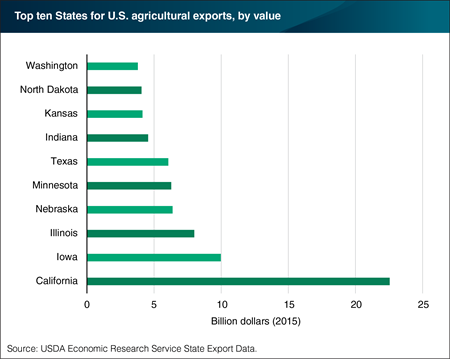 All U.S. States export some agricultural products to markets overseas. While the value of agricultural exports is relatively modest for States like Alaska, Rhode Island, and New Hampshire (less than $100 million in 2015), many States rely on agricultural exports for a large share of their market revenue. The largest beneficiary of overseas markets is California, which contributes 17 percent of all U.S. agricultural exports by value. The $23 billion worth of agricultural goods exported by California in 2015 is more than double the next largest State total, Iowa. Iowa and Illinois exported agricultural goods valued at $10 and $8 billion, respectively, in 2015. To put these numbers in perspective, the 2012 Agricultural Census calculated the total value of agricultural sales in California to be 44 billion dollars, while Iowa and Illinois were valued at 31 and 17 billion, respectively. In California, tree nuts account for the largest share of exports. Soybeans are the most valuable export in five of the top ten exporting States, including Iowa, Illinois, and Nebraska. Other leading export products for States in the top ten exporters include cotton, wheat, and fruits. The data in this chart is drawn from the ERS State Export Data product updated in October 2016.