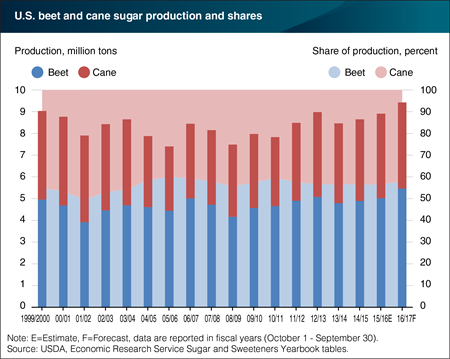 U.S. sugar production is forecast to reach a fiscal year record in 2016/17 of 9.4 million short tons, raw value (STRV), 5.5 percent above the current estimate of 8.9 million STRV for 2015/16, and nearly 400,000 more than the previous record set in 1999/00. Sugar production in the United States is sourced from two distinct crops, sugarbeets and sugarcane. The majority – an average of 56.4 percent since 2000/01 – has come from sugarbeets. The leading producer of sugarbeets in the United States is Minnesota, followed by Idaho, North Dakota, and Michigan. Those four States represented 83 of production in 2015. Sugarcane production is even more concentrated, with 91 percent of production occurring in Florida and Louisiana. Domestic production for both sources of sugar increased in 2014/15 and is forecast to continue growing in 2015/16 and 2016/17. A significant portion of the production gains is expected to come from higher yields and sugar recovery rates, particularly for sugarbeets in 2016/17. This chart uses data from the ERS Sugar and Sweeteners Yearbook tables and draws from the Sugar and Sweeteners Outlook report published in October 2016.