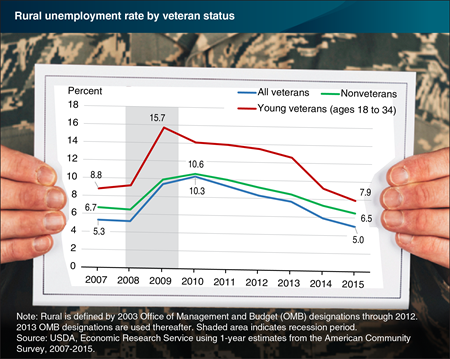 The unemployment rate for rural veterans has declined steadily since reaching its peak of 10.3 percent in 2010. In 2015, it stood at 5.0 percent, its lowest rate since the start of the 2007-09 recession. The unemployment rate for young rural veterans (ages 18 to 34) has seen a large decline too—from a high of 15.7 percent in 2009 to 7.9 percent in 2015. Young veterans often face high unemployment due to service-related disabilities and a lack of civilian work experience, which is a greater obstacle when the economy is weak. The recent drop in unemployment for all veterans partly stems from the post-recession national economic upturn. Public and private efforts that help veterans transition into the workplace quicker and into better paying jobs that fit with their skills have also reduced the time that veterans remain unemployed. These efforts include greater recognition of the skills veterans learn during their service—such as discipline and timeliness—and the value of those skills in the workplace. This chart provides an update to the ERS report, Rural Veterans at a Glance.