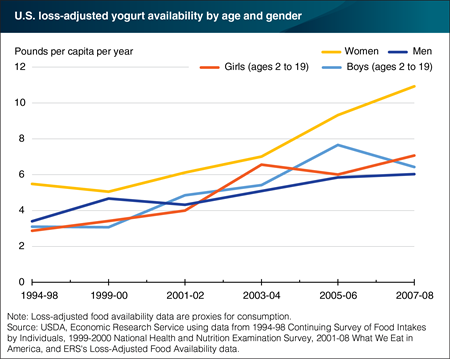 As the grocery store dairy case illustrates, yogurt’s popularity in the United States is on the rise. According to ERS’s loss-adjusted availability data (proxies for consumption), supplies of yogurt available for U.S. consumers to eat grew from 3.6 pounds per person in 1994 to 10.3 pounds per person in 2014. Linking ERS’s loss-adjusted food availability data with intake surveys from 1994-2008 allows a look at estimated consumption by demographic groups and reveals that yogurt is especially popular with American women. In each survey year, women’s per person estimated consumption was higher than men’s, boys’, and girls’. Men consumed more yogurt per person than boys and girls in 1994-98 and 1999-2000, but by 2001-02, children’s consumption of yogurt was higher than men’s. In 2007-08, U.S. women consumed an estimated 10.9 pounds of yogurt per person, followed by girls at 7.0 pounds per person, boys at 6.3 pounds per person, and men’s at 6.1 pounds per person. Over 1994-2008, consumption of yogurt grew for both lower and higher income groups; for adults with less than a high school education, high school graduates, and college graduates; and across all racial/ethnicity groups. The data for this chart and similar information on 62 other food commodities can be found in the ERS report, U.S. Food Commodity Consumption Broken Down by Demographics, 1994-2008, March 2016.