Six States account for about half of all U.S. pumpkin production 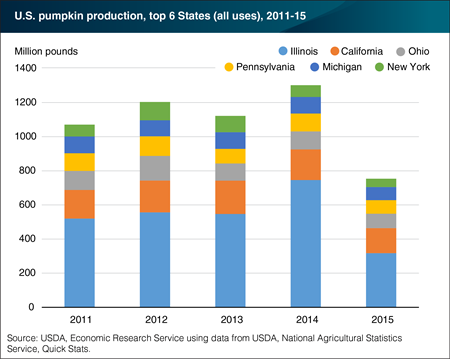 All U.S. States produce some pumpkins but about one-half of the total are grown in 6 States. In 2015, U.S. farmers in those States produced 753.8 million pounds of pumpkins. Production dropped over 40 percent from 2014 with a notable drop in acreage planted in Illinois. In June 2015 there were heavy rains in Illinois that significantly reduced pumpkin harvests. Despite this decline, Illinois remained the leading producer of pumpkins by acreage and output, with almost 80 percent of acres typically devoted to production for pie filling or other processing uses. Supplies from the remaining top five States are targeted toward the seasonal fresh market for ornamental uses and for home processing. In addition to traditional jack-o'-lantern types, demand for specialty pumpkins continues to expand as consumers look for new and interesting varieties such as Big Mack, Blue, Cinderella, Fairytale, White Howden, Knuckle Head, and heirloom varieties. This chart uses data from the ERS Vegetable and Pulses Yearbook dataset.