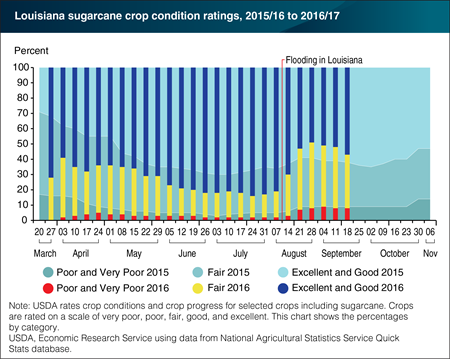 Heavy rainfall and severe flooding in Louisiana affected the State’s sugarcane crop, according to USDA crop condition ratings, which were rated positively prior to the severe weather. Lafayette, LA, centered near the state’s main sugarcane region, recorded August precipitation that was 5 times larger than normal. Following the floods, significant portions of the crop were downgraded from Excellent or Good ratings to Fair. Additionally, sugarcane rated Poor or Very Poor increased from 2 percent prior to the severe weather to a peak of 9 percent afterward. Fortunately, crop ratings have improved during September and are currently comparable with crop conditions in 2015/16. With the sugarcane harvest in Louisiana typically beginning in late September and continuing through January, Louisiana sugar production in 2015/16 is still expected to be about 15 percent larger than the previous year due to increased harvested acreage and sugarcane yields in the State. This chart appears in the ERS Sugar and Sweeteners Outlook report in September 2016.