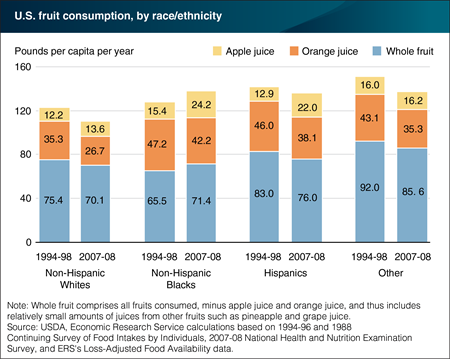 A recent linking of ERS’s loss-adjusted food availability data with food intake surveys from 1994-2008 revealed that Non-Hispanic Blacks were the only group of the racial/ethnic groups examined that had higher whole fruit and total fruit consumption in 2007-08 compared with 1994-98. The 2015-2020 Dietary Guidelines for Americans recommend that at least half of a person’s recommended fruit consumption be whole fruit. Non-Hispanic Blacks increased their whole fruit consumption to 71.4 pounds per person in 2007-08—an amount still below that of Hispanics and the "other" racial/ethnic group. All four racial/ethnic groups consumed smaller quantities of orange juice and larger quantities of apple juice in 2007-08. Non-Hispanic Blacks and Hispanics had the largest increases in apple juice consumption. This chart appears in“A Closer Look at Declining Fruit and Vegetable Consumption Using Linked Data Sources” in the July 2016 issue of ERS’s Amber Waves magazine.