Food insecurity is expected to decline across much of the globe, but remain most pronounced in Sub-Saharan Africa 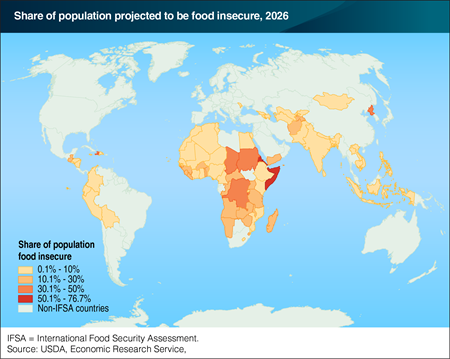 The 2016 USDA International Food Security Assessment projects that food insecurity will decline over the next 10 years for the 76 low and middle-income countries examined by ERS. The projected improvement, which is based on a new, demand-driven model introduced in this year’s report, is the result of the outlook for declining real food prices and rising incomes across most of the countries that is provided in USDA Agricultural Projections to 2025, released in February 2016. The share of population that is food insecure in the 76 countries is projected to fall from 17 percent in 2016 to 6 percent in 2026. At the regional level, the greatest improvement in food security is projected for Asia, where the food-insecure share of the population falls from 13 to 2 percent. In 16 of the Asia region’s 22 countries, less than 5 percent of the population is projected to be food insecure in 2026. In the Latin America and the Caribbean region, the share of population that is food insecure is projected to fall from 15 percent in 2016 to 6 percent in 2026, with strong gains expected in all countries except Haiti, where improvement is expected to be relatively modest. Sub-Saharan Africa is projected to remain the most food-insecure region in the world but, like the other regions, its food security situation is shown to improve over the decade—although at a slower rate. This chart is from the ERS report, International Food Security Assessment: 2016-2026, released June 30, 2016.