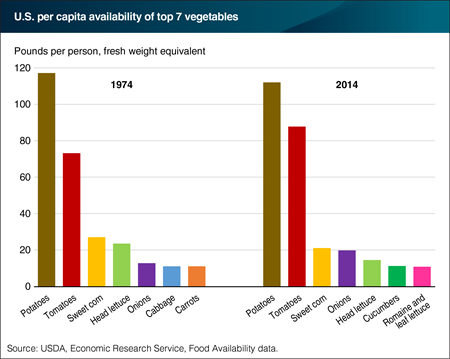 According to ERS’s food availability data, an average of 385.4 pounds of fresh and processed vegetables per person were available for U.S. consumers to eat in 2014, up from 334.1 pounds in 1974, but down from peak per capita vegetable availability of 424.3 pounds in 1996. Potatoes, tomatoes, and sweet corn were the three most popular vegetables in 1974 and remained the most popular in 2014. While per capita availability (a proxy for consumption) of potatoes and sweet corn has declined over the last four decades, per capita tomato availability grew from 73.2 pounds in 1974 to 87.8 pounds in 2014. Fresh tomato availability increased by 74 percent and canned tomatoes by 10 percent. Onion availability also grew from 12.7 to 19.7 pounds per person over 1974-2014. In 2014, cucumbers and romaine and leaf lettuce at 11.3 and 10.8 pounds per capita, respectively, replaced cabbage and carrots in the top 7 rankings. Head lettuce was the fourth most popular vegetable in 1974, but dropped to fifth in 2014, perhaps related to the growing popularity of romaine and leaf lettuce. The data for this chart come from the Food Availability data series, part of ERS’s Food Availability (Per Capita) Data System, updated August 3, 2016.