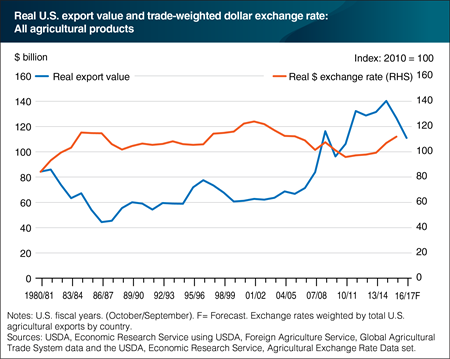 Macroeconomic factors, including the exchange rate of the U.S. dollar, played a key role in the strong growth of U.S. agricultural exports that began in the early 2000s, with exports peaking in U.S. fiscal year (FY) 2014/15 (October/September). While other variables, particularly robust income gains in developing countries, supported market growth, an extended period of dollar depreciation during FY2003-14 increased the competitiveness of U.S. exports. Since FY2014, however, U.S. agricultural exports have declined in real terms as global income growth has slowed and the dollar has strengthened against the currencies of many U.S. agricultural export markets and competitors. A stronger dollar tends to have the greatest impact on U.S. exports of bulk and intermediate goods that are more readily substituted for by exports from other suppliers. Exports of consumer-oriented products that are more differentiated from those of competitors tend to be less affected by a stronger dollar. The real trade-weighted dollar exchange rate is an indicator that accounts for both the change in each country’s exchange rate with the U.S. dollar and its share of U.S. agricultural exports. This is an updated version of a chart found in Global Macroeconomic Developments Drive Downturn in U.S. Agricultural Exports released on July 12, 2016.