Farm households vary in their reliance on income from farming 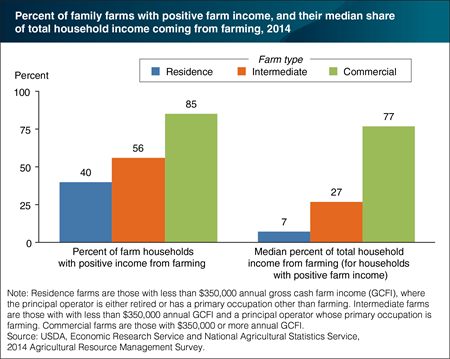 The roughly 2.05 million U.S. family farms vary widely in size and by the share of household income from farming. Farm income contributes little to the annual income of farm households operating residence farms—those with annual gross cash farm income (GCFI) less than $350,000 and where the principal operator is either retired or has a primary occupation other than farming. In contrast, farm income is a secondary source of income for households with intermediate farms—those with annual GCFI less than $350,000 and a principal operator whose primary occupation is farming. For commercial farms with annual GCFI greater than $350,000, farm income is a primary source of income. In 2014, 40 percent of residence farms had positive income from farming activities, which contributed only 7 percent to total household income for the typical (or median) household reporting positive farm income. For households of intermediate farms, 56 percent had positive farm income, which comprised 27 percent of their total household income. Most commercial farms—85 percent—had positive farm income, and farm income typically accounted for 77 percent of total income for these households. Annual income from farming is volatile—15 percent of households of commercial farms experienced a loss from their farming operation in 2014. This chart is found in the ERS topic page on Farm Household Well-being.