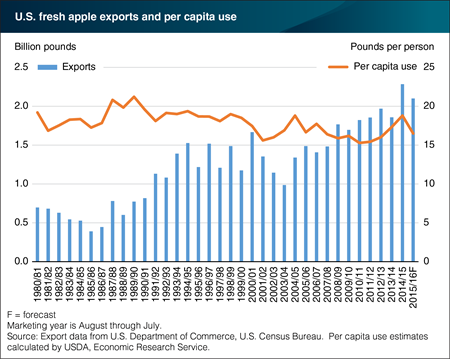 Most apples produced in the United States are consumed in the domestic market, but exports have been growing steadily over the past few decades. Export volume rose from an average of 607 million pounds in the 1980s to a record 2.3 billion pounds in the 2014/15 marketing year (August-July), and the export share of production climbed from 14 percent to more than 28 percent over the same period. The growth in exports reflects changes in both supply and demand. Domestic demand for apples faces growing competition from counter-seasonal imports of fruits such as grapes, berries, and stone fruits, which are increasingly available in the winter months when fresh apples were once one of the few types of fruit readily available to most consumers. On the supply side, production continues to grow faster than domestic demand, and producers have focused on many new varieties such as Fuji and Gala that are popular in key export markets. Today, Mexico, Canada, and India account for more than half of U.S. fresh-apple exports, with Mexico alone receiving more than 25 percent of the total U.S. export volume. This chart is from the July 2016 Amber Waves article, “A Bigger Piece of the Pie: Exports Rising in Share of U.S. Apple Production.”