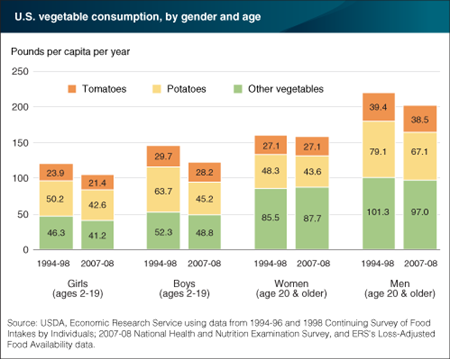 Americans’ consumption of vegetables has not increased, despite advice to the contrary from the health and nutrition community. A recent linking of ERS’s loss-adjusted food availability data with intake surveys reveals that total vegetable consumption fell across four U.S. age and gender groups between 1994-98 and 2007-08, though the decline for women was small. Much of the vegetable decline was driven by reduced consumption of potatoes. Boys had the largest drop; their potato consumption fell from 63.7 pounds (fresh-weight equivalent) per person per year in 1994-98 to 45.2 pounds in 2007-08. Intake of tomatoes—the second most consumed vegetable—held fairly steady for all age groups. When consumption of potatoes and tomatoes is subtracted from the mix, consumption of other vegetables by girls, boys, and men fell, too, but not as sharply as that of potatoes. For women, annual consumption of nonpotato and nontomato vegetables increased by 2.2 pounds per person. This chart appears in “A Closer Look at Declining Fruit and Vegetable Consumption Using Linked Data Sources” in the July 2016 issue of ERS’s Amber Waves magazine.